We have detected that you are using an older version of Microsoft Edge. For the best possible experience, please use Google Chrome or the new Microsoft Edge.

Travel for free with your sorority | Become a Group Leader >

Ancient history meets Greek mythology meets pasta on this 15-day trip through Italy and Greece. Travel back in time to where Western Civilization began on the Acropolis of Athens, and then nerd out on all things Zeus in Olympia and Delphi. Once in Italy, get a full serving of Roman ruins with a side (or full plate) of spaghetti, and have your own personal Renaissance in the breathtaking city of Florence.

What are the top highlights?

You’ll stay at accommodations hand-picked by our team of local experts, in rooms only for EF Ultimate Break travelers. Each property is located in a safe, convenient area. You’ll receive your exact accommodations 30 days before your trip departs.

Admit it, booking flights is the worst. Here's why you should let us do it for you:

Booking with a friend? Let us know and we’ll do our best to make sure you’re on the same flight. Still want to book your own flights? That’s cool, simply select ‘No flights included’ instead of your departure city in the ‘Flights from’ dropdown.

Board your overnight flight to Athens, the cradle of Western Civilization and home to some of the greatest monuments of the ancient world. Also gyros. Don’t forget about the gyros.

Welcome to Athens! 2,500 years ago, it was kind of a happening place, and still is today—with fewer people in togas walking around. It’s a vibrant metropolis, and a perfect jumping-off point for your journey through the Greece. When the sun goes down, expect to see people socializing in the streets. It’s how they roll.

In the evening, it's time for your Welcome Mixer. Enjoy appetizers and drinks with your new friends and travelers. Afterwards, you’re free to take the party elsewhere!

Today, take a VIP tour of Athens with a local guide. You’ll climb high above the city to what’s left of ancient Athens, also known as the Acropolis. It’s here where you’ll find the remnants of 2,500 year-old buildings and sculptures, which is quite impressive when you consider things built today last about 3,498 years less than that. Most of what you see was planned and executed by Pericles, who was named, “the first citizen of Athens.” Today, there are a few more citizens in Athens—around 660,000—who can thank him for this energetic and bustling city.

Free Time Suggestions
Psiri: Think of Psiri as the Brooklyn of Athens: impossibly hip, and filled with opportunities to dance, drink, or just hang out.
Loukoumades: Sample a food that sounds better with each word: a deep fried donut covered in honey and sprinkled with cinnamon.

Day 4: Travel to Nafplio Region via Mycenae and Epidarus

It’s time to leave the big city life behind and head west to Peloponnesus, a peninsula so beautiful, it will make you wonder why everyone isn’t following you there. You’re going to the region of Nafplio, but on your way, you’ll stop for tours of Mycenae and Epidarus.

Head to Olympia, the ancient site of the Olympics. Before it became a weeks-long international competition sponsored by soft drink and insurance companies, the Olympic games began as a way to honor Zeus. (Did he even lift, bro?) Olympia today is a UNESCO World Heritage Site, and there is a lot to see and appreciate. From the views of the idyllic countryside, to the remains of countless temples and ancient buildings, this might just turn out to be the best ancient city experience you’ve ever had.

Your journey continues to Delphi. According to Greek mythology, Zeus sent two eagles to discover the center of the world, and they landed in Delphi. Today, it is a fascinating look into the past, and a great excuse to up your Greek mythology trivia game. Beginning in the 6th century BC, Delphi began hosting the Pythian Games, similar to the Olympic Games, but with more emphasis on art and dance (i.e. more feelings).

Head to the town of Kalabaka, located directly underneath the massive Meteora, a rock formation that’s a delight to the eyes due to its steep, jagged peaks that stand more than 1,000 feet high. The city has a modern feel, since it burned down during WWII and was rebuilt in the 1940s. However, there is evidence that an ancient Greek settlement was here as far back as the 20th century…BC.

Free Time Suggestions
Wander through town: Check out the quaint neighborhoods in town, passing by churches, shops, and places to eat homemade sausage, pies, and a local specialty called spatoula AKA Greek pudding.
Shop for souvenirs: Grab yourself a gift for the folks back home—hand-made wooden objects and religious icons are very popular. Spatoula is not quite as popular—pudding doesn’t travel well.

Now is the time for this big show. The Meteora monasteries. On top of some of those limestone rocks you’ve been admiring, are functioning monasteries (with what one can only assume is questionable cell service). The nuns and monks that reside on Meteora have chosen to spend their time praying and contemplating life, and you get to see what it’s all about. Get ready to feel the greatest sense of harmony and relaxation of the trip, while simultaneously overcoming that fear of heights.

You’ve got a big travel day ahead. First, it’s back to where this adventure started, in Athens. And then you’ll hop on a plane and make your way to Rome, Italy’s capital city that is bursting at the seams with energy. Locals fill the streets, day and night, usually doing something that involves eating or drinking.

They say all roads lead to Rome, but once you’re there you quickly realize that all roads actually lead to restaurants. Take the morning to satisfy your cravings and sip some espresso, then see perhaps the most staggeringly important building you can possibly see in Europe: the Roman Colosseum. 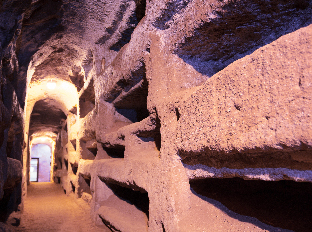 Rome has a bit of a spooky side. Travel deep underground to catacombs built by early Christians. Then, head to St. Paul’s Basilica. Existing since at least 324 AD, they say St. Paul himself is buried there.

Day 11: Free Day in Rome + Optional Visit to the Vatican

Today you get to explore centuries worth of culinary perfection, unbelievable architecture, and local fashion on your own. And let it be said, Rome looks goooood for being 2,000 years old. (It must moisturize.) Shop, eat, drink, and talk like an Italian (with your hands) during your free day. Embrace the culture and indulge in carbs during your last day in the Eternal City.

Free Time Suggestions
Piazza Navona: Head over to Piazza Navona, one of Rome’s best-known public squares. Fountains, street performers, shops, restaurants, and so much more. Hangout, sip coffee, and embrace the atmosphere of this outdoor hub.

Trevi Fountain: Rumor has it, if turn your back to the Trevi Fountain and toss a coin over your shoulder, it guarantees you’ll return to the Eternal City. Throw in a second coin, and you’ll not only come back, but also find love. (Significant other not guaranteed by EF Ultimate Break.) 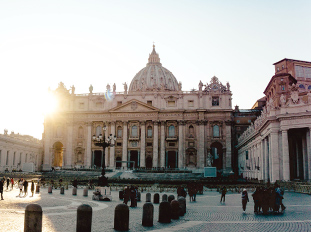 A Visit to the Vatican(extra cost)

Visit the Pope’s house: Vatican City. Take a guided tour of the Vatican Museum and St. Peter's Basilica, and get your dose of art history up close and personal—viewing Michelangelo's famed Sistine Chapel frescoes.

Day 12: Travel to Florence via Orvieto

Travel to Florence via Orvieto. Goodbye bustling city, hello Tuscan countryside. Florence was king during the Renaissance, and it still holds on to that artsy, fashionable, cultural vibe today.

You’ve got a full day in Florence, the compact capital of the Tuscany region known for its quaint, cobblestone streets and impressive artwork from Renaissance geniuses like Michelangelo and Donatello. Join a local guide as you walk to some of the most famous sights in the city while taking mental notes of the best smelling restaurants you pass for later. After all, it is Italy, and food is kind of a big deal.

Free Time Suggestions
Pitti Palace: Pitti Palace once housed the dukes of Tuscany and their extensive art collections, these days the dukes are gone but the art remains. Be sure to check out the statues in Boboli Gardens out back.
Vivoli Gelateria: Would it really be a trip to Italy without gelato? The answer is no. Vivoli Gelateria is the local institution to go to for this frozen treat. 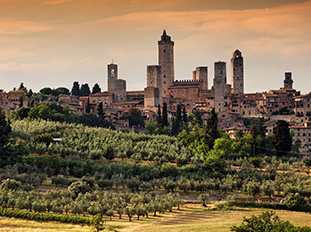 Note: Availability is subject to your tour’s departure date for specific trips.

Some of the world’s best wine come from Tuscany, and you get to sample some at a scenic winery. Next head to the medieval walled town of San Gimignano, home to the world-famous Gelateria di Piazza gelato shop.

Regarded as the birthplace of the Italian Renaissance, Tuscany is known for its landscapes, history, and artistic legacy. It is also an area known for its wine, notably Chianti, which is sure to come in handy later when you have plenty of free time on your hands.

Free Time Suggestions
San Miniato al Monte: Snap the perfect picture of Florence’s skyline after hiking up to San Miniato al Monte. No filter needed.
Shopping in Florence: The area between Ponte Vecchio and the Duomo is ideal for fashionistas and foodies alike.

Farewell Dinner
Share some last laughs (and maybe shed a few tears) at an included farewell dinner with the group.

Translation: Goodbye, friends. Your next destination awaits—home. Before you head to the airport, enjoy your last few moments together. Take one more group photo. Grab that final drink. (Fine, maybe a couple of drinks.) But this isn’t goodbye. It’s “See you later.” The only question is, where?

1. Double the fun
A lot of our trips line up back to back! Give us a call—we can help you add another and save big while you're at it.

2. Go ahead or stay behind
Extending your trip is easy! During checkout, you'll have the option to fly to (or from) the gateway of your choice for an additional fee. We'll adjust your flights accordingly, but you'll be responsible to take care of your transportation, hotels, and other logistics outside of tour.

Note: Depending on your desired gateways, additional fees may apply.

No reviews (yet) for this awesome trip

Select a date to see prices