Growing a Community of Passionate, Globe-Trotting Women Through Sorority Travel | EF Ultimate Break
We have detected that you are using an older version of Microsoft Edge. For the best possible experience, please use Google Chrome or the new Microsoft Edge.

Growing a Community of Passionate, Globe-Trotting Women Through Sorority Travel

How one Delta Delta sorority member stepped out of her comfort zone on a group trip to Greece. The catch? She signed up solo. After having such an incredible experience with travel-loving-students-turned-friends from around the world, she joined EF Ultimate Break's Greeks to Greece program and became a Sorority Ambassador—so she could help students in her own community have similar life-changing trips. 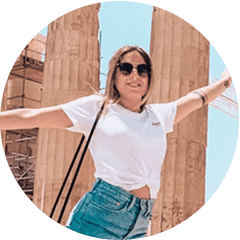 In March of 2018, Veronica, a member of the Delta Delta Delta sorority and a student at the University of North Texas, stumbled across our Greeks to Greece program and her life was forever changed. She had been following EF Ultimate Break for a few years, but had never gone on a trip with us. When she found out that we offer trips dedicated to sending sorority women to Greece (and Spain, and Italy, and Ireland!), it was time to finally pull the plug. She knew she was taking a big step but she didn’t know that it would lead to years of future travel with dozens of students in her own community.

Veronica made the bold decision to book the tour solo, and join a handful of other sorority women from other schools who had been planning their Greeks to Greece trips for almost a year. She didn't have time to recruit any friends herself for this trip, but her goal was to become a Sorority Ambassador and create her own trip with students from the UNT community back home.

Speaking about her first EF Ultimate Break Greeks to Greece experience, Veronica says: "I was really nervous to go on the trip and weary about it in general, but as soon as I met up with the other girls at the airport, we immediately hit it off. I got super close to my roommate especially, and at the farewell dinner we decided that we had to plan a new trip together for summer ‘19.”

Time to plan the next one—and go for free

As a Sorority Ambassador who had now been on a Greeks to Greece trip herself, Veronica was ready to start planning—and recruiting—for the next one. She says: “I immediately started marketing the trip on Facebook when I returned, and I didn't expect to get as much engagement as I did.” She was especially surprised that after a meeting she held on campus, close to 20 people signed up right away. Because she recruited so many people, Veronica was now going on this next trip for free! And the whole group enjoyed a big discount on their trip cost.

At the airport before departure, she observed her group of 26 students—a third were women she knew from her sorority and the rest were students she had met and bonded with through the experience of planning her trip. They had met up for pizza nights and Mamma Mia watch parties, and swapped outfit ideas through their group chat. Now they were leaving for the adventure of a lifetime together. “I couldn’t believe I had actually set this up,” Veronica says.

Veronica expressed how much it meant to relive some of her favorite spots in Greece with her fellow students, and how rewarding it was to give this experience to so many people. To this day, Veronica keeps in touch with those travelers over group chat where they share memories and even plan new trips. She’s even attending another EF Ultimate Break trip to Australia and New Zealand next year!

Know someone in a fraternity? Tell them about our Greeks to Greece fraternity program! →

An adventure with your sorority starts here

Become a Sorority Ambassador and help your chapter have the trip of a lifetime. Earn your spot for FREE by signing up fellow sisters, alumnae, and friends.